I’m sharing a couple tracks I’ve recorded recently and by way of guaranteeing their chill vibe I can assure you that all were recorded while our lovely pup Ruby was in the room.

I’m charging $5 for this because I’d like to raise money for a legal fund for my friend Derwin Jones. Derwin has become like a brother to me and he is currently locked down 23 1/2 hours a day while the prison is also reducing the amount of food served. You can read more about his case and why he has more than earned his freedom here, as well as donate if you’re so inclined.

This material was recorded around the end of 2015 and 2016. I had been playing a lot in open D tuning and found some simple, pleasant finger picking patterns. If there is any real-world inspiration for this it is a trip I took to Alaska in July of 2015. The sheer scale of the terrain, along with the tremendous resilience and oddity of the people who live in the more remote areas is remarkable. I felt compelled to work towards expanding my musical vocabulary from playing around with synths and Ableton effects to live recording using more traditional instruments. Somehow it made me feel like less of a hipster dickhead, though I think most would still rightly label me as such. I don’t pretend to be a gifted guitar player, but it has grown to be one of my favorite pastimes and going forward I anticipate making even greater use of the instrument.

Though I had certainly played these guitar parts before, all of these recordings are mostly improvisational in that I started with a repetitive hook and went from there. They were recorded on a single mic built into a Fostex MR-8 multi-tracker with some reverb added upon recording and some effects added in Ableton, though the only substantial edits to the audio itself was to remove some pops and clicks resulting from the primitive recording setup. I mention this setup only because I’m timidly proud of how the guitar fades out in the final two tracks since this effect was achieved only through playing and not through fading a guitar track out in post-production. I recognize that despite this feat, there is much I have to learn in the way of recording methods, but as I’ve been preparing the final release I just thought I’d mention it since it still sounds pretty good to my ear despite all the creaks of my chair while recording.

This is a couple months old but I’m just getting around to sharing it. Please be gentle, I’ve only been playing guitar for a few months. I’d surely occupy the lowest caste in Dinotopia.

I stumbled into some deep, dark drones yesterday and before I mucked it up by trying to tweaking it I thought I’d share. I’ve been pushing myself to do more improvisation and less painstaking messing around on the computer, which sort of seems like a rationalization for laziness in retrospect but it’s pushed me in a lot of good directions and made me better understand the tools at my disposal. It’s free (as are all my other releases) and I’d encourage you to download it in as high quality a format as you’re willing because it’s an improvement over the stream and grab the best pair of headphones you’ve got. Enjoy!

I’ve been wanting to put something like this together since I started recording music and it is through the inestimable patience and talent of Miranda Langevin that I am able to bring this to you. There’s more information about the full length release here. Because the whole thing is about 40 minutes long and Miranda had gotten an amazing job on a feature set we had to film an excerpt.

At the risk of over-explaining, this video attempts to capture an experience with hypothetical extraterrestrials. It has been postulated that encounters with extraterrestrials are so bizarre because the visitors are coming from other dimensions and our means of perceiving them are too rooted in our own dimension to make sense of them. In part influenced by the computer animation team at Ancient Aliens and by the wild imagery of Jack Vance’s Dying Earth series, this is my attempt to create visually what I hope the full piece accomplishes aurally.

Well folks, the moment you didn’t know you were waiting for is finally here. The new release from Music For Cougars. As a frequent admirer of the animation department at Ancient Aliens, I’ve wasted many a day pondering the fictional events depicted on the show.

Pictures like these confirm that somebody else does or is paid to do basically the same thing. I’ve decided to pay tribute to these brave souls by offering my own auditory version of ancient events. According to the Ancient Astronaut  theorists, the Bolivian site Puma Punku was created by sky gods in one night using a magical flute that enabled them to move massive stones and put them into position. It’s legitimately a cool looking site, despite the revolving door of insane white dudes insisting aliens built it. Here are some more gems from the show: 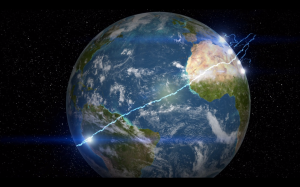 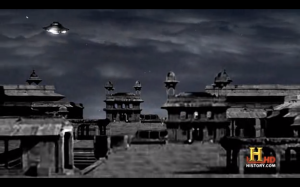 The next time people wax poetic about how amazing computing technology just show them this to remind them that progress is nihilistic. Anyway, that’s the background of this latest release and I hope you enjoy it!